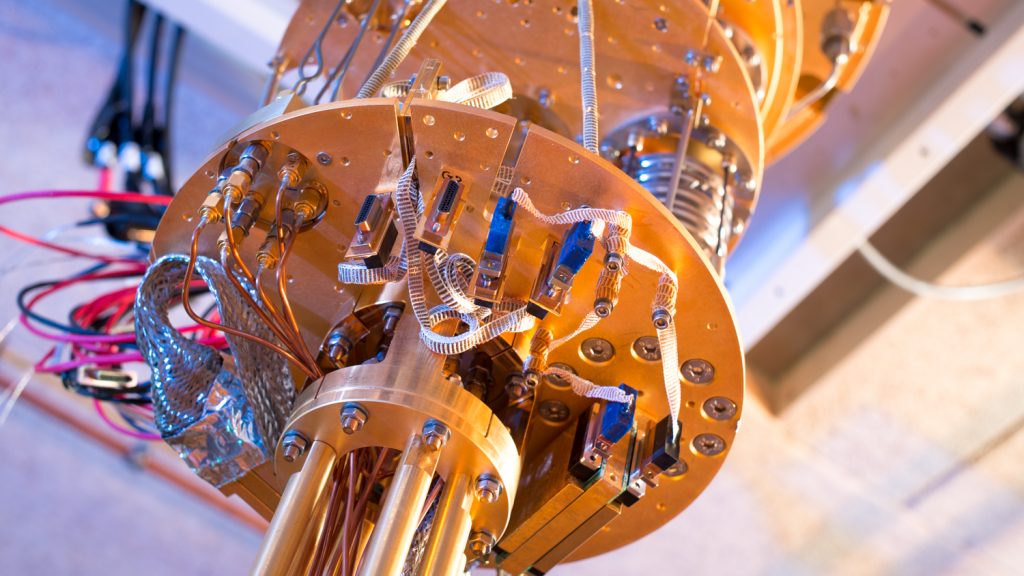 October 5, 2019 By tempuser Comments are Off

When Michael Freedman joined Microsoft’s theoretical research group two decades ago, he was a renowned math genius known for his fundamental research into an obscure field of math called topology.

His job — which he didn’t think of as a real job at all — was simply to keep doing math, no strings attached.

That broad charter has ended up putting Microsoft on the path to building the first topological qubit, a robust type of quantum bit that Microsoft believes will serve as the basis for a scalable, general purpose quantum computer system – and mark a profound breakthrough in the field of quantum physics.

“We’re seeing the potential foundation for a new, revolutionary technology,” said Todd Holmdahl, the Microsoft corporate vice president in charge of the quantum effort. “You know, I get goosebumps.”

On Monday at Microsoft’s Ignite conference, the company showcased the progress it has made toward developing both a topological qubit and the ecosystem of hardware and software that will eventually allow a wide range of developers to take advantage of quantum computing’s power.

That progress includes a new programming language, which is deeply integrated with Visual Studio and designed to work on both a quantum simulator and a quantum computer.

Microsoft’s plan to build a quantum computing ecosystem is based on Freedman’s field of math and a branch of physics so seemingly mystical its early pioneers invoked philosophy and spirituality to describe it, and its later disciples attracted funding and support from self-help gurus in the 1970s.  Even today, experts use terms like “magic state” to describe some elements of quantum computing theory and practice.

Although it evokes mystical comparisons, experts believe quantum computing will have innumerable practical benefits. That’s because it would allow scientists to do computations in minutes or hours that would take the lifetime of the universe on even the most advanced classical computers we use today. That, in turn, would mean that people could find answers to scientific questions previously thought unanswerable.

Researchers say quantum computing could eventually be used to solve some of the world’s toughest problems, from world hunger to the dangerous effects of climate change.

“A quantum computer is able to model nature,” said Krysta Svore, who has led development of Microsoft software designed to work on quantum computers, as well as the quantum simulators that allow development to proceed even while the first machines are being built. “With classical computers we’re not able to really understand those processes.”

In one of its earliest uses, experts believe a topological quantum computer will help artificial intelligence researchers speed up the labor-intensive process of training algorithms using machine learning.

Craig Mundie, who as Microsoft’s chief research and strategy officer first backed Freedman’s push into quantum computing a dozen years ago, noted that if a quantum computer could hypothetically process a training algorithm for the Cortana digital assistant in a day rather than a month, that would mark a profound improvement in AI advances.

“Even if everything else was the same, Cortana would improve 30 times faster,” said Mundie, who has continued to be deeply involved in the project.

For Freedman, to see a lifetime’s work in theoretical mathematics morph into an actual computing platform that could tackle previously unsolvable problems is “very intense.” After spending most of his career exploring theoretical math with no strings attached, it’s perhaps ironic that knots – or, more specifically, topology knot theory – is part of what led him to what he affectionately calls the first real job of his life, building a topological qubit.

Freedman says he spends little time thinking about the potentially life-altering effects of his work.

“I’ve been asked about the applications of quantum computing – you know, what motivates me? Do I want to cure disease, design new materials, protect the environment?” he said. “The truth is, it’s none of that. At this point in the project, the only thing I care about is making the quantum computer work.”

From theoretical to practical
Part of Freedman’s challenge is that Microsoft isn’t just interested in building a quantum computer it can show off in a lab somewhere. Instead, the company is embarking on a plan to deliver a full-fledged topological quantum computing system. That includes everything from hardware capable of consistently running calculations that require tens of thousands of logical qubits to a complete software stack that can program and control the quantum computer.

“We’re doing everything,” Holmdahl said, “from the physics to the control plane to the software that runs the computer to the algorithms that you need to do interesting things like quantum chemistry, to the applications for personalized medicine or helping with climate change.”

Microsoft has even had a companion research project focused on cryptography and security in a post-quantum world, and has participated in industrywide efforts to prepare quantum-resistant cryptographic algorithms.

The centerpiece of Microsoft’s efforts is the topological qubit.

A dozen years ago, when Freedman came to Mundie looking for backing for his quantum computing idea, Mundie said quantum computing was in a bit of a doldrums. Although physicists had been talking about the possibility of building quantum computers for years, they were struggling to create a working qubit with high enough fidelity to be useful in building a working computer.

For researchers using physical qubits with only a minimum degree of fidelity, it requires roughly 10,000 of them to make one “logical” qubit – which is a qubit reliable enough for any truly useful computation.

The problem is that qubits are extremely finicky. If you disrupt them in even the smallest way, they “decohere,” which in layman’s terms basically means they stop being in a physical state where they can be used for computation.

Freedman had been exploring the idea that topological qubits would be more robust because their topological properties would make them more stable and provide more innate error protection. That’s because, by definition, a topological state of matter is one in which an electron can be fractionalized and appear in different places within a system.

Once the electron is divided, it’s harder for it to be disturbed because you must alter all the different places the information is being stored.

As a longtime supercomputer designer and software engineer, Mundie said he was instantly sold on the idea of a quantum bit that was both more robust and had built-in fault-tolerance. It would make the task of designing a scalable, useful machine dramatically more manageable.

“Computing itself was already transforming every sector of society and the economy,” he said. “I realized that if you could create a new class of computing that was capable of altering these fundamental building blocks, you might be able to do over again what computing has done over the past 50 or 60 years.”

A full stack
With Mundie’s backing, Freedman set up a lab in Santa Barbara, California, and began recruiting some of the world’s pre-eminent condensed-matter and theoretical physicists, materials scientists, mathematicians and computer scientists to work on building the topological qubit. That team now boasts many leading quantum experts who have joined Microsoft as employees in the past year, including Leo Kouwenhoven, Charles Marcus, David Reilly and Matthias Troyer.

To create the infrastructure for a full computing platform, Microsoft has simultaneously worked on building hardware, software and programming languages for topological quantum computing.

At Ignite on Monday, Microsoft announced the latest milestone in its effort to build a full stack: A new programming language that is designed for developers to create apps to debug on quantum simulators today and run on an actual topological quantum computer in the future.

“The same code that you’re running today in simulation you can run tomorrow on our quantum computer,” Svore said.

Svore said the new tools are designed for developers who are interested in being on the cutting-edge of computer advances – the same type of people who were early adopters of machine learning and other artificial intelligence advances.

You don’t have to be a quantum physicist to use them. The new programming language is deeply integrated into Visual Studio, and it includes the kinds of tools that developers rely on for classical computing, such as debugging and auto complete.

“It shouldn’t look too different from the things they’re already doing,” Svore said.

The system, which will be available as a free preview by the end of the year, also includes libraries and tutorials so developers can familiarize themselves with quantum computing. It’s designed to work at a higher level of abstraction, so that developers without quantum expertise can actually call quantum subroutines, or write sequences of programming instructions, working up to writing a complete quantum program. Developers can sign up to participate today.

The system is designed so that individual users can simulate problems that require up to 30 logical qubits of power on their own personal computers, and select enterprise customers, using Azure, can simulate more than 40 qubits of computational power.

Svore said one key advantage to having a programming language that works in a simulation environment is that it will help people interested in using quantum computers to solve problems get a better sense of how to harness quantum power for different types of problems. That will accelerate their ability to take advantage of quantum computing when it’s available.

The coldest place on earth
Even though a topological qubit is expected to be more robust than a regular qubit, it is still quite fragile. The only way to protect it from outside interference that could cause it to decohere is to create and operate it in a really, really cold place.

Douglas Carmean, an architect in Microsoft’s quantum computing division, leads the group working on a system architecture in which qubits operate at just a hair above absolute zero, or30 millikelvin – the coldest place on earth, colder than deep space – while still being able to communicate with people and other computers working at room temperature.

That’s the kind of advance a researcher might try to do in a perfect lab setting with one qubit. But Carmean wants to create systems that programmers can ultimately use to calculate on hundreds of thousands of logical qubits, or more.

“My job is basically to take something that the theorists and the experimentalists have shown works once and then create millions of them in a form factor that is useful,” he said.

The end of the beginning of a long journey
Quantum computing experts will often note two things: That one of the best uses they see for a topological qubit is to develop better quantum computing technologies, and that one of the great pleasures of this kind of work is that you can’t predict what incredible advances it will produce.

When Mundie first backed Freedman’s research effort a dozen years ago, it was because he could envision getting to this point, where quantum theory would lead to engineering.

More than 50 years after Richard Feynman first pioneered the idea of quantum computing, Mundie is now looking ahead to the quantum economy that he believes this new type of computing will create. Just like classical computing has changed virtually every aspect of society, he thinks quantum computing will eventually help fuel revolutionary changes in almost everything, starting with chemistry, materials and machine learning.

“For the first time in 70 years we’re looking at a way to build a computing system that is just completely different,” he said. “It’s not an incremental tune-up or improvement. It’s a qualitatively different thing.”

Top image: Quantum bits, or qubits, need to be created and operate at very cold temperatures. Researchers use a dilution refrigerator, where a quantum device is inserted into a “puck” that will be cooled down to millikelvin temperatures.